We set off from Newcastle Airport with the weather forecast to rain, rain, rain, with a little more rain scheduled for Belfast for the next few days. We were pleasantly surprised to land in a slightly grey but DRY Belfast. We had time to wander around the city of Belfast, to see some of the street art, the infamous ’Big Fish’, the Ulster Museum and we even squeezed in a visit to Maggie May’s Café, which was as nice as people had reported, and so we pass on the recommendation (see photo below)! 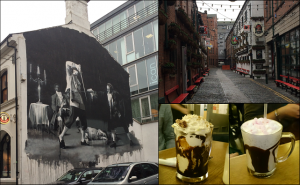 The main aim of the Wednesday timetable was to give this year’s newly funded students a chance to talk and get to know each other, and to hear about their research topics; whilst for the 2014/2015 group it was a chance to catch up with each other’s progress and adventures since the Newcastle event in June 2015.

While the new starters were perfecting their ‘elevator pitch’ (ie. Sell yourself to a prospective boss in the time it takes you to climb 7 floors in a lift!), we spent time reflecting on the advantages of being part of the Northern Bridge partnership. We also highlighted areas in which more could have been made as a new starter, and this was the spark for the afternoon session, which we were to run for the new cohort. This ‘Peer Feedback’ session also included a pitching session for possible training events to be run and organised through Northern Bridge by us, the students. The focus of the afternoon was careers and employability; we heard from a Northern Bridge student who had undertaken a placement that had benefitted her research and provided a possible career path post-PhD. It certainly gave us some food for thought!

The day was concluded with a drinks reception in the wonderful Great Hall of Queen’s University followed by a meal at an Italian restaurant (also followed by a visit to the nearby pubs and bars for some!). 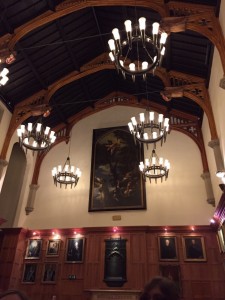 The closing session focussed on ways of disseminating research via the media, discussing ‘being Mary Beard’ – an academic who regularly presents her research interest to the public through documentaries, radio programmes, and her blog, alongside her academic publications. This session also brought up very current issues regarding gender and the representation of academics (women academics, in particular) within the media. It was a short but thought provoking session which raised questions about women in academia and in the media, and how we can move to change these stereotypes. This is obviously an issue which is currently being scrutinised and addressed by academia and the wider public alike.

The autumn conference was a great introduction for the new starters, and provided some food for thought for those of us in stage 2 of our PhD projects – How will we disseminate our work? What road will be taken, an academic or non-academic path? What makes my CV stand out from all the others?