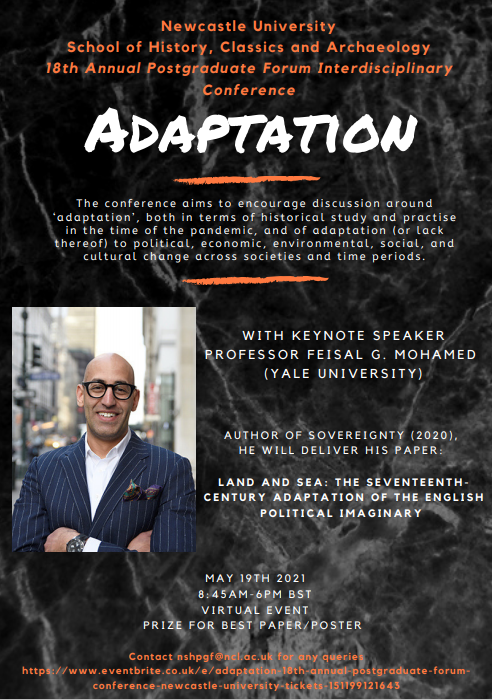 We are excited to invite you to our 19th Annual Postgraduate Conference, on the 19th May 2021.

This virtual conference aims to encourage discussion around ‘adaptation’, both in terms of historical study and practise in the time of the pandemic, and of adaptation (or lack thereof) to political, economic, environmental, social, and cultural change across societies and time periods. Papers will be presented in cross-disciplinary thematic panels, and we will be hearing from postgraduate students from across the globe as well as a little closer to home in Newcastle!

We are delighted to be joined by Yale University’s Professor Feisal Mohamed as our keynote speaker, with his paper entitled Land and Sea: The Seventeenth-Century Adaptation of the English Political Imaginary

Conference schedule (all times are BST)

14:10 – 14:30 – Katharine McCrossan (University of Glasgow), ‘Co-operation, Competition, and Consumerism: The Scottish Co-operative Movement in the 1950s.’

Panel – Landscapes and Their Challenges

10:30 – 10:50 – Laura Stops (University of Exeter), ‘Politics, Passages and Peripheries: The adaptation of the Porta Esquilina for a new imperial age.’

10:50 – 11:10 – Katerina Gottardo (Durham University), ‘Adaptation to the environmental context: the substructures of caveae in Roman theatres in the northern-central Italy.’

11:10 – 11:30 – Huilin Yang (University of Glasgow), ‘Exploring the role of olive cultivation in the Mediterranean ecosystem using archaeological evidence and the Annales framework.’

13:10 – 13:30 – Arnau Lario-Devesa (University of Barcelona), ‘Re-editing the past, or how to fabricate continuity: The case-study of the roman sanctuary of Can Modolell (Cabrera de Mar, Barcelona) and the neighbourhood of Saint John.’

13:50 – 14:10 – Hina Khalid (Newcastle University), ‘How Abbasid women thrived and possessed agency even under a challenging period and rule that held customs and practices of misogyny.’

Panel -Reinterpreting & Reusing the Past

14:50 – 15:10 – Jessica Habib (University of Glasgow), ‘Debating the Colonial Identity of the Ottoman Empire: Caliphate and Colonizer?’